What is induction heating 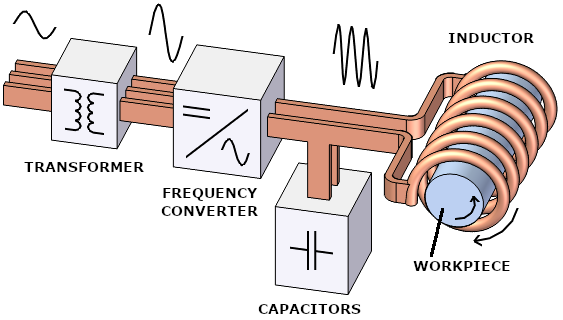 The heat is not generated evenly across the entire cross-section of the workpiece. For example, when heating a cylindrical billet, the highest current density is on the surface, and decreases approximately exponentially to the center. This phenomenon is called the "skin effect."

The depth at which the current density value drops to Jo/e, that is, to 0,368 density on the surface, is called the skin depth δ

In practice, it is desirable to modify this relationship:

The skin depth depends on the current frequency and on the resistivity and relative permeability of the workpiece at the operating temperature.

For illustration, we present skin depths for copper and carbon steel(mm):

When considering operating costs, the efficiency of energy transfer from the inductor to the workpiece is interesting - the so-called electrical heating efficiency. For a long coil and a cylindrical workpiece, the electrical efficiency ηe can be approximately calculated from:

The electrical efficiency decreases as the D/d ratio increases because the coupling of the inductor's magnetic field to the workpiece is reduced. For this reason, it is not efficient to use one inductor for a large diameter range of workpieces. The efficiency also decreases with increasing skin depth of the workpiece. A low penetration depth is used, for example, for surface hardening, where a quick heating/cooling process is used on a thin surface layer.

For forming (forging) it is necessary to heat the workpiece as homogenously as possible. For this reason, a slower heating process is chosen to allow the heat to be soaked to the core. However, too slow heating worsens thermal efficiency because the time in which material heated to high temperatures loses heat by radiation is prolonged. Increasing the skin depth also helps to heat up the core faster. The frequency compromise is chosen to achieve the required in-depth heating with good electrical efficiency.

Experience has shown the following operating frequencies for various sizes of carbon steel heated to 1200°C:

For heating strips and slabs, the thickness of the workpiece must be larger than 2.5 times the skin depth. In lesser thicknesses, the workpiece becomes transparent for the electromagnetic waves and the heating efficiency is reduced. This must be taken into consideration when designing the induction heating device.

Thyristor or transistor frequency converters are used to supply inductors at a frequency higher than in the distribution network (50 Hz). For supplying the power circuits of the frequency converter, an isolating transformer is mainly used, which modifies the mains voltage to the required input voltage of the converter. Its other function is the galvanic separation of the power circuits of the converter and inductor from the mains. For safety reasons, the insulation resistance of the inductor against the ground potential is measured. The delta/star connection of the transformer suppresses the disturbing penetration of odd harmonic components into the network. Compensating capacitors are connected in parallel to the inductor. Their capacitance together with the inductance of the inductor determines the operating (resonant) frequency of the converter. In addition, these capacitors compensate for the phase-shifted component of the current flowing through the inductor. As a result, several times lower current flows through the inverter output than through the inductor.

Induction heating enables good heat stabilization of the heating process. Programmable logic controllers are mostly used to control the heating process. Temperature is usually measured by non-contact pyrometers. In the case of aluminum and its alloys heating, thermocouples are also used.

One of the further benefits of induction heating is the capability of its easy mechanization and automation, which reduces the human work and is necessary in case of high production rates.

Thanks to its advantages, induction heating has a wide application: